I had a plan to do at least one overnight trip each month of the year. I almost made it, but eventually stumbled on the finish line, and didn’t get out in November.

On Friday December 1 I did a short overnighter in Lerike. As I wrote in my earlier post I’ve hardly had any time to get outside, as the situation at work has been crazy. But I needed my time in the woods and drove out for this short trip.

It did however get less relaxing than I thought. When I came home from work I had to quickly pack my backpack and hurry out to Lerike. It was already quite dark when I got there. There wasn’t any hiking involved, but more of a car camping trip instead. I don’t think my mind had the time to change pace from work, as it does when you spend longer times outside.

I put up the tent, set up my sleeping gear and made a fire.

I sat by the fire for quite a while making dinner, and drinking mulled wine (classic Christmas beverage in Sweden that’s served hot with raisins and almonds.)

It was nice to get outside, but I didn’t get the tranquillity I was looking for. There’s a large road across the lake, and also an airport, and there was a constant sound of traffic and airplanes landing and taking off.

After dinner I went to bed and watched a movie on Netflix. I had brought my Panyam 600 sleeping bag for the first time this season, as winter was closing in. I also tried my hexagonal AliExpress floor Thad the same dimensions as my tent. 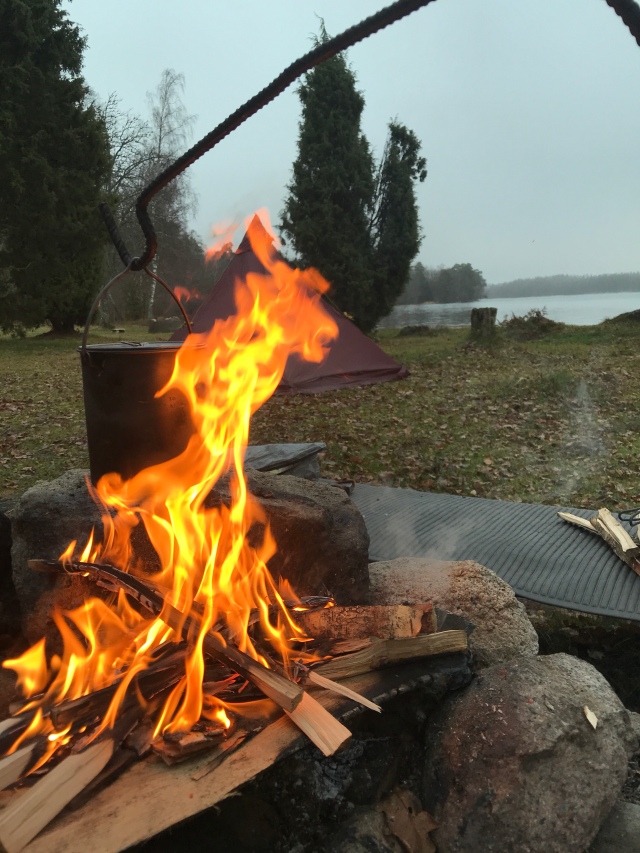 When I woke up I had the usual mental struggle to force myself out of the warm sleeping bag and out into the cold. I got the fire going and made breakfast and coffee and walked around the cape. Water levels had risen quite a bit since last time I was here, and the end of the cape had now become an island. After breakfast I packed up and left.

It was a short trip, as most trips have been this fall. I want to get away on a two night trip soon, and I’m considering going to Tresticklan on the 5-7th of January on my annual first-week-of-the-year camping trip. I really like Tresticklan as it’s desolate, quiet and beautiful.