The snow has finally melted in southern Sweden, even though the temperatures drop below freezing during the night, and the lakes are still frozen over.

I wanted to take my youngest daughter on an overnight trip, so she could test her new sleeping bag, the Cumulus Junior 250. I had it customized with 850cuin down instead of 700cuin to add more warmth.

I tried to persuade the rest of the family to come with us, but spending a Friday evening in a tent wasn’t something any of them where interested in. So it was just me and Corinne.

Since it was still cold outside I wanted to have a small fire inside the tent. I brought the big tipi, the Helsport Normarka 6, and a Tentipi Hekla 7 firebox.

For sleeping gear I brought two Multimat Adventure sleeping pads. I didn’t want to use my more fragile (and expensive) Exped mat, since Corinne can roam around the tent like a drunk elephant at times.

I also brought the Aegismax G1 sleeping bag for me, the Cumulus Junior for Corinne and the Wind Hard Tiny quilt for extra warmth for the both of us.

I packed up the car after work, and then drove to the store. We filled up on goodies; candy, chocolate, lemonade, sausages, buns, cheeses etc. then we drove out to Lerike, at the north end of Helgasjön. I thought about going somewhere else, but it was starting to get late, and it’s only a short drive from home. Unfortunate there is a lot of noise from the nearby airport, and a large road across the lake.

When we came there we started to set up the tipi. Corinne was overexcited about sleeping in the new sleeping bag, and hardly wanted to wait until the tent was up.

When we had the tent up I took out the sleeping gear and put thin reflective mats on the floor to insulate a bit from the cold ground.

I started a small fire, and we sat next to it as it slowly grew larger.

When the fire was large enough we stared to grill some sausages. We had the top vent and the lower side vent fully open. The door was halfway open. It did get a bit warmer in the tipi, and we only had trouble with the tipi getting soaked in smoke once, when a piece of firewood started to create a lot of smoke. We opened up the door fully and ventilated the tipi. 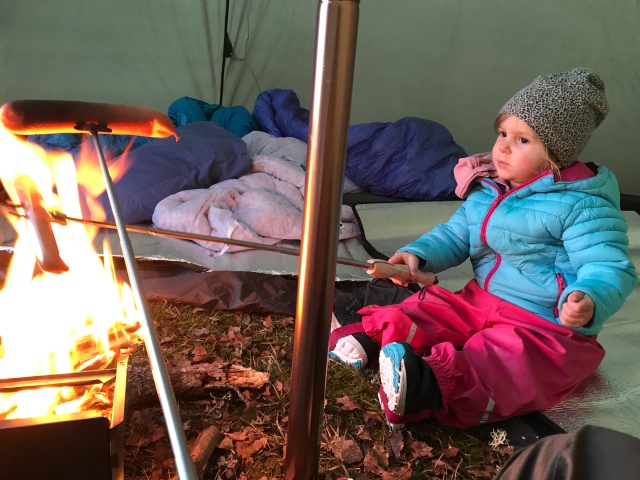 After we’d had dinner we sat for a while by the fire and ate all our snacks. But it was beginning to get late, and time for both of us to get to bed.

I dressed Corinne with a thick fleece base layer and then she crawled down into her sleeping bag. She was super exited about sleeping in it. On our earlier trips she’s only been using a quilt, so this was her first time in a sleeping bag.

I put the quilt over both of our sleeping bags, and we quickly fell asleep. She woke up on a couple of occasions, but other than that, we slept good the entire night.

The next morning Corinne woke me up at 06.20. I was did not feel like I was done sleeping, but since she was, apparently I was too. I didn’t mind that much though, since I got to see the sunrise for once. I stayed in my sleeping bag for a while, but Corinne roamed around the tent and laid beside me once in a while, when she felt that she needed to heat up again.

Eventually I got up too, and we made breakfast. I didn’t want to go through the hassle of making a fire, but just heated up water in the Trangia stove instead. We had breakfast, explored the cape a bit and then packed up. We where back home in time for the rest of the family to eat breakfast. It was just a short overnight car camping trip, but it was fun to be out with C again.

Next time I’ll try to bring her on a longer trip. Maybe a two night trip, where we set up a base camp and then go on day trips. I just got a map and a guidebook on trips in Glaskogens nature reserve, so maybe we’ll try that later in spring.