Me and the family have been on a road trip through Europe the last two weeks, and got back home on Tuesday morning. It was a nice trips, where we stayed in Venice for two nights and then spent a lot of time in Croatia.

I loved the sun and the crystal clear water of the Adriatic Sea, but soon I started to miss the forests and the dark lakes of Sweden.

So when we got back home I went on a short overnight canoe trip.

I came to the canal lock that separates the lakes Helgasjön and Skavenäsasjön, parked the car and put the canoe in the water. A German family pulled up from the lake just as I was about to enter.

I paddled north, and in the beginning I had houses on both sides, as I paddled through Åby. But it’s a small village, and soon there was forest on both sides.

I followed the shoreline and once in a while stopped to look for suitable camp grounds. Not because I planned to stop right away, but as a reference for future trips. I started a list on Google maps earlier this year, where I save all the possible campsites that I find.

My goal was the island Ferön in Tolgasjön. Despite knowing about the the canoe route, I didn’t know this place actually was so popular for canoing. During my short trip I saw a lot of canoes on the lake, and many in groups of three or four canoes. 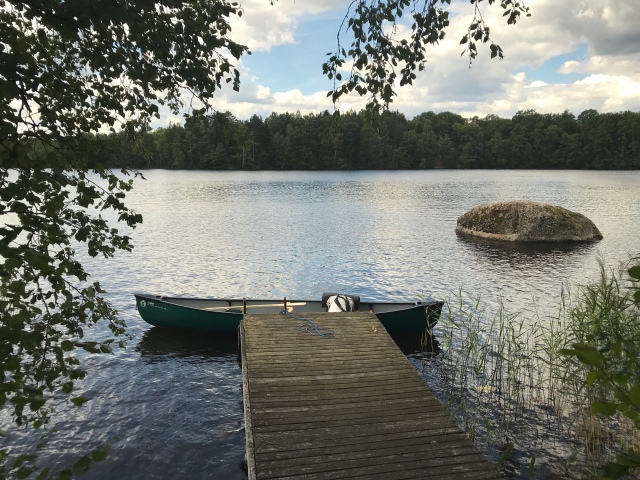 I found one of the designated campsites, and checked it out. There was a lean-to shelter and a fireplace next to a large field. At first I thought the field wasn’t part of the campsite, but then I spotted a fireplace with benches in the middle, and in the far end of the field there was a water tap, trash bins and outhouses. It was enough room for tents to house a small festival. I prefer more secluded places though, and continued.

I didn’t make it all the way up to Ferön, but decided to stop at a cape south of the island. The cape had very old oak trees and pine trees scattered across it, with bushes and small trees on the shores that gave privacy and a lot of flat grounds for the tent. With such a perfect place I just had to stop. 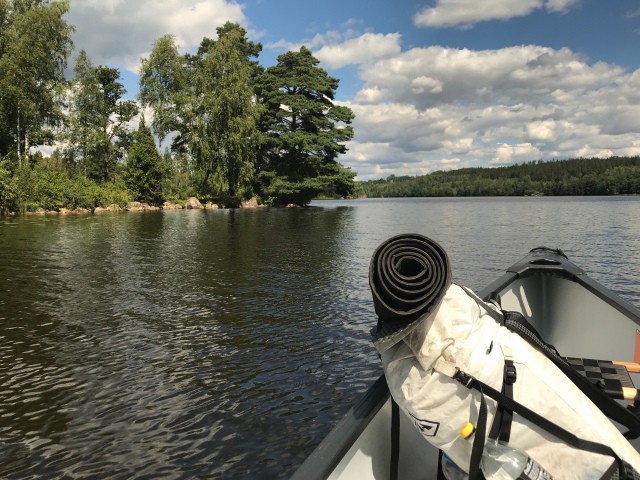 I set up the tent, inflated my sleeping mat and puffed up my quilt. This time I decided to go with my Wind Hard Tiny quilt, as it was very warm outside. It worked perfectly as a summer quilt. I also found two trees that was suitable for setting up the hammock.

When everything was set up, I made lunch and then I just chilled in camp. Sunbathing on the sleeping mat, or chillaxing in the hammock. A boat with a seemingly nude couple headed towards the cape, but when they spotted my camp they turned back again.

(The current fire ban didn’t include camping stoves at the time, but I did soak the ground in water before I used it. Since then the authorities have issued an extended fire ban, which includes camping stoves too.)

I thought about going for a paddle later in the afternoon and evening, but it was so nice to just relax in camp.

The weather got worse in the late afternoon though, and soon the sky was more or less covered in clouds. I made dinner, and then laid in the hammock reading War and Peace on my phone. Apparently I had already read all the books on my eBook reader. Some of the twice.

In the evening the skies cleared up, and the weather was beautiful again, albeit a bit chilly. A boat with a couple of guys anchored just off the cape and spent a couple of hours fishing. They didn’t disturb the peace at all. What did disturb the peace though was the guys running circles on their Jetski a few hundred meters south of my camp. Sounds travel far across the lake, and they just kept at it for a long time. But I don’t have any exclusive right to access the wilderness, so I guess I shouldn’t be annoyed. And eventually they quit and the lake was calm and silent again. 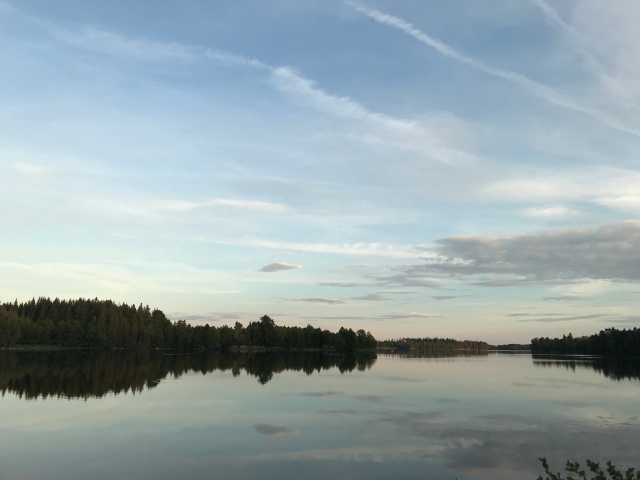 I thought about watching a movie or series on Netflix before I went to bed, but I was too tired and went straight to bed instead. I didn’t sleep too well though, as I have trouble sleeping where ever I am.

The next morning I woke up to clear skies. This was my first solo trip since my winter hike in Stora Mosse in March. I love to bring C along, but I also really value the solitude and the time to just put the brain on pause. I didn’t want to leave the lake, as it was so nice to just chill there.

I made breakfast, and left the camp to explore the lake north of the cape. I found another somewhat suitable campsite, and then paddled to Ferön. There where a bunch of canoes and a lot of tents there, as one or more of the groups that had passed me had set up camp there last night. The island seemed to be great for camping, and I’ll come back here to camp there sometime in the future.

I paddled back to my camp and then took a swim, and packed up. I hesitated to leave, so I took another swim and made lunch before I paddled back. I tried to use my hammock as a sail, but there wasn’t enough wind so it ended up in the lake instead. 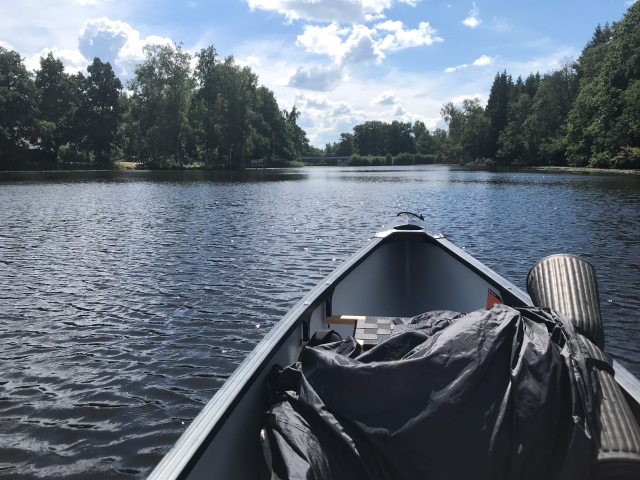 I got back to the parking lot, put the canoe on the roof of the car and drove back home.

As for the canoe I’m considering saving up for a different canoe. I’m not too pleased with this one for solo use (and paddling with C is almost like solo use). It’s great for family trips, but it was a lot heavier than advertised by the seller so I didn’t save as much weight as expected when I bought it. Despite being lighter than the old 45kg canoe, and easier to handle with the carrying yoke, I still deem it too heavy for solo use.

I’m still considering the Esker Wood Ki Chi Saga or a Bergans Ally. The Ally has the benefit of being easy to store, and easy to fix if something breaks on a trips. It’s also a lot cheaper than the Saga, since they use to go for around 1000€ in the end of the season. The Saga still ticks all of my boxes though, but it’s too expensive for me. But I still have a picture of it taped on the inside of my bathroom locker (with a list of my goals for visualization ).

In conclusion I had a great trip. The weather we’re having now is perfect for canoe camping trips.

3 thoughts on “Canoe camping in July”