Earlier this week, my neighbor Lars asked me if I wanted to join up for short climbing trip in the northern parts of Småland. Lars is pretty active in the local climbing club and he had two different places in mind. We would drive up on Friday afternoon, climb one of the walls and then do some hammock camping. The next morning we would drive to the other wall and climb there before the temperatures got too hot.

Lars posted a note on Facebook, asking if anyone wanted to join up. A couple of guys from Växjö climbing club and a guy from Lenhovda, a nearby town, decided to join on Friday evening.

Lars and I packed up the car after I got off from work, and drove north. We drove to the town Vetlanda, where we would meet up with the others. We stopped by the pizzeria “Hasses” that Lars had been recommended, met up with Alfred and Filip from Växjö and Mikael from Lenhovda. We bought food and then set off towards Rankulla, where we would climb this evening.

We used the app 27Crags to navigate to the parking lot near the wall. The approach went through the forest, which was packed with mosquitoes and moose flies. Either we took a wrong turn somewhere, or the place is not well visited, because it was hardly a trail we followed.

We came up from the backside of the wall, and ended up on top of it. We decided to rappel down the wall, in an attempt to save time. I’m scared of heights, wouldn’t go near the edge, and felt really uneasy when anyone else did too. But I learned that the other guys, despite being experienced climbers, where also scared of heights. My fear of heights diminishes as soon as I get my gear on though, as I trust it to save me. 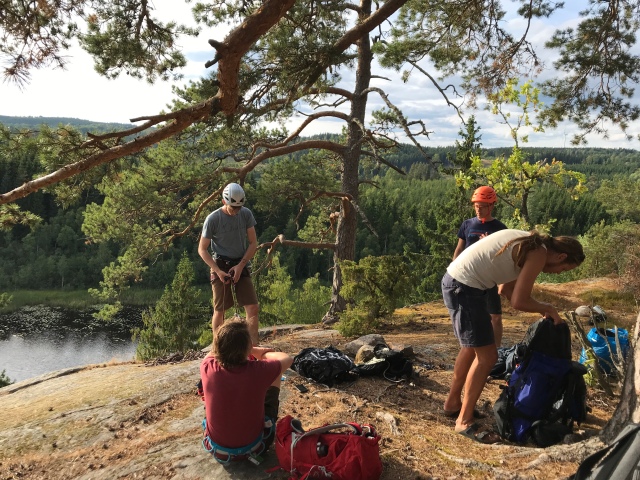 Alfred, the climbing instructor, went down first, and I came down as the third guy. It’s quite scary to go over the edge, but once you start rappelling down the fear disappears. In the end it took a lot longer for all of us to rappel down than to just hike down, but it was a fun way of going down.

We had one route where we rappelled down, Mikael climbed another route to get a new rope up next to it, and Alfred and Filip put up yet another rope. 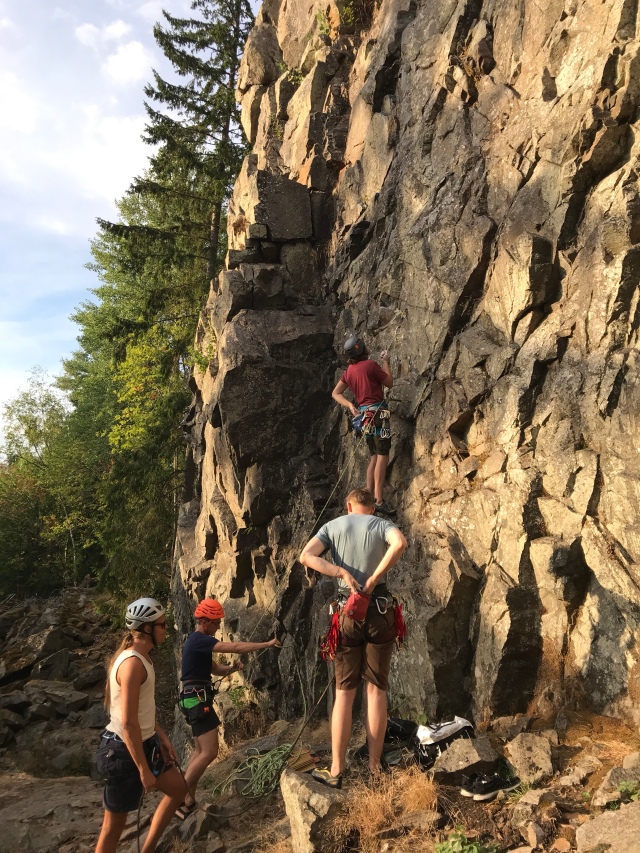 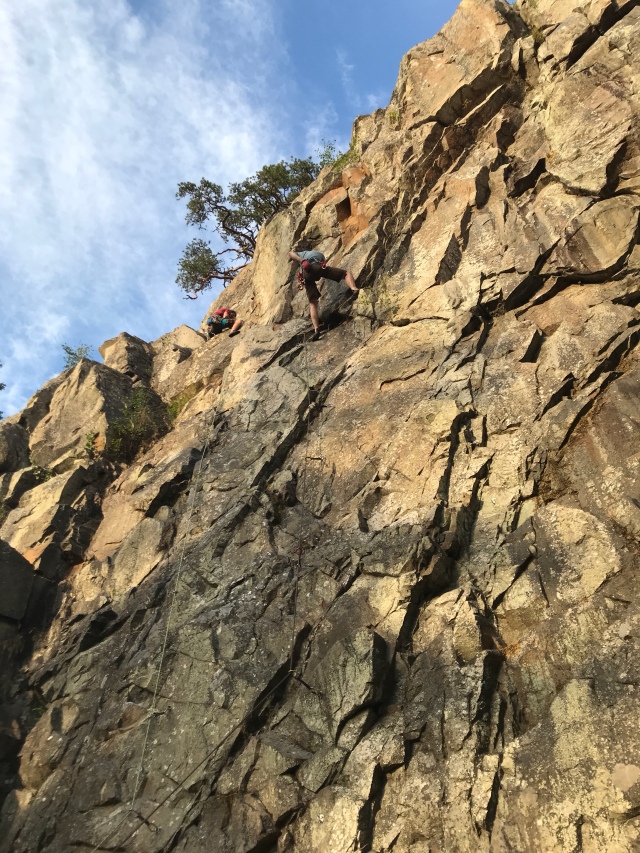 I haven’t been climbing since last summer, and I’m a real rookie when it comes to climbing. I compensate my lack of technique with brute force though. I’m borrowing gear from Lars, but this is something that I want to continue doing, so I’ve decided to buy my own kit as soon as possible. I like top rope climbing, as my fear of heights makes it a bit scary. 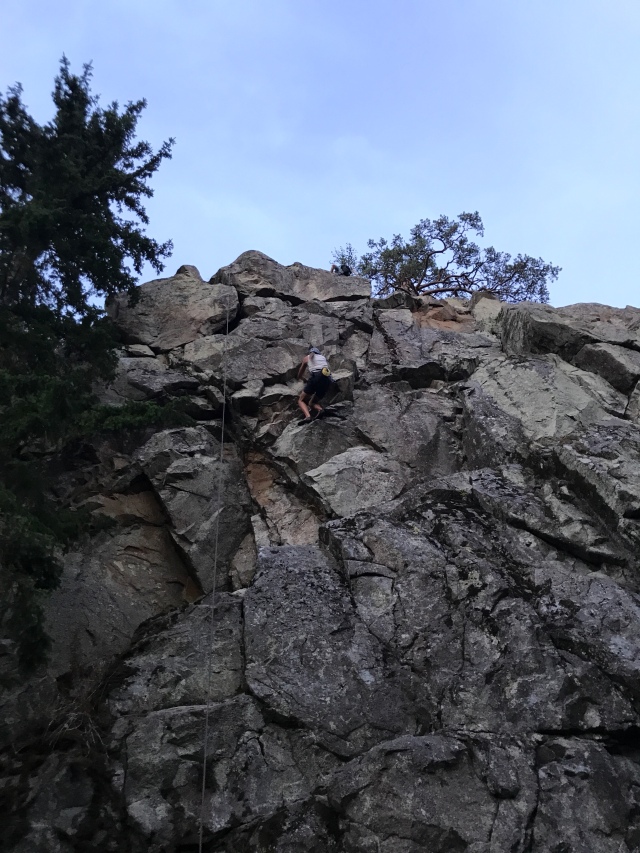 I fell a couple of times at a (for me) difficult route with a bit of an overhang, and got a couple of trips through the air. We kept climbing until dusk, when we had to pack up. The other guys drove home, but Lars and I headed towards our planned camp site.

We had planned to camp at a beach near the next wall, Skärsjön, which is a new wall. When we came to the beach though it was crowded with a dozen Epa-tractors and a handfull of mopeds. It was obviously the place where the local teenagers hung out. We looked up another place on Vindskyddskartan, a map that shows lean-to shelters across Sweden.

The shelter we found didn’t have a nice view at all, but we continued hiking for a couple of hundred meters and camped at a beach with birch trees perfect for hanging hammocks.

It was almost midnight when we’d got out hammocks up, but we had some snacks, shared a couple of beers and watched the moon come up across the lake. There wasn’t even a breeze, and the silence was almost deafening.

We went to bed, and I used one of my Wind Hard Tiny quilts as an under quilt. It’s not meant to be an under quilt, and it took a bit of fiddling to get it to work.

In the early morning I woke up to the sound of rain. Neither one of us had brought tarps, but I was too tired to do anything else but stay in the hammock. The rain was only a light shower though, and most if it didn’t even penetrate the leaves above us. 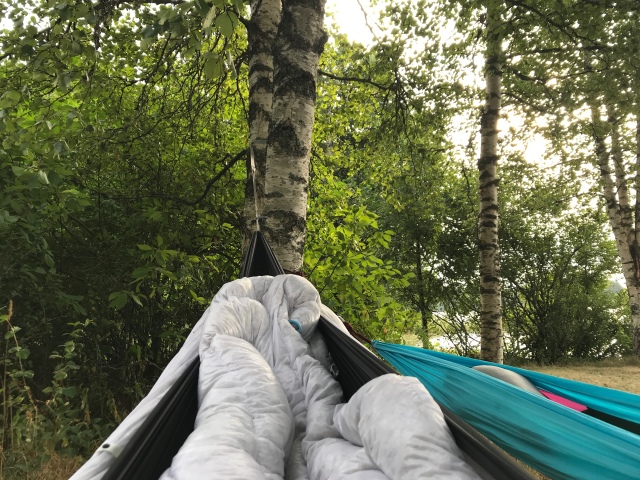 The next morning we packed up and drove to the next wall, Skärsjön. Skärsjön is a Slab, and it was a bit different to climb there than on Rankulla. We took a wrong turn this time too, and ended up bushwhacking our way to the top of the rock. 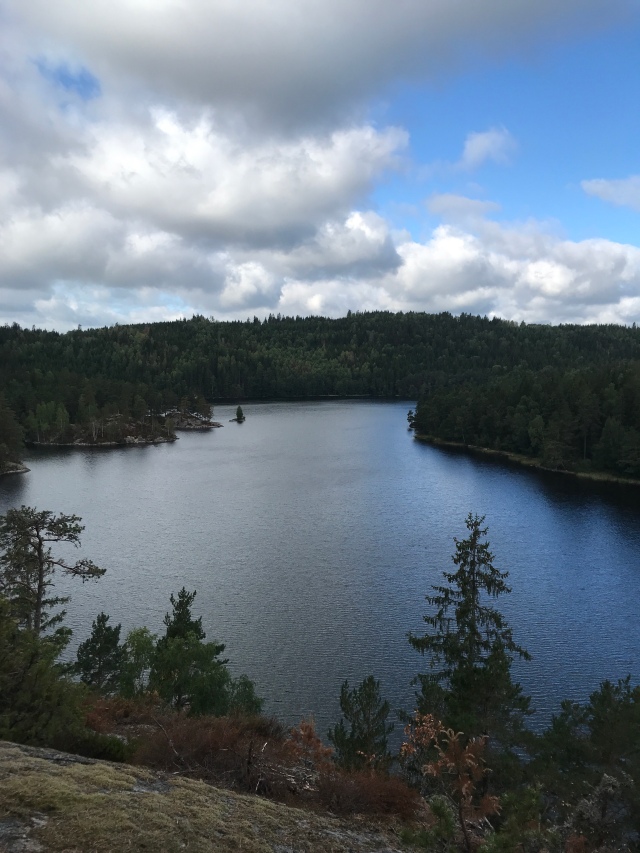 Being just the two of us, we decided to hike down instead of rappelling down. We tried three different routes, and I tried to make it a bit more difficult by avoiding some of the largest and most obvious holds. Around lunchtime we decided to drive back home, and packed up all our gear.

It was a nice trip, and I’ve really come to like climbing. The area around Växjö is pretty flat, and there’s mostly bouldering around here, but I do like top rope climbing like this. Sadly for my wallet, I’ve found another outdoor interest that requires new gear purchases.

5 thoughts on “Climbing in Småland”