A couple of weeks ago, in the middle of November, I went on a canoe camping trip with C. After trying hot tent camping a couple of times, I got really hooked, and upgraded the tipi to a Tentipi Safir 5 BP.

I had looked up an island on Tolgasjön that would be perfect for a camp. Since it was November I didn’t want to paddle too far with C, and this was just a couple of hundred meters of paddling from the campsite on mainland where I had planned to put in the canoe.

I drove to the area, but there was a sign at the private road down to the lake, that said it was prohibited to drive on the road. In the end of the road there was a designated campsite for the hiking trail Sigfridsleden and the canoe route Värendsleden.

I knocked on the house closest to the road where the owners lived, and they told me it was ok for me to drive down to the lake and unload the car.

I put the canoe in the water and packed it with my gear. It got pretty filled up, with a sack of firewood, the stove, a backpack and the large bulky tent. I had expected the tent to be large, but I was still surprised by how bulky it actually was. But this wasn’t a tent intended for hiking or having to carry it any longer distances.

C and I got into the canoe, and paddled out to the island. It didn’t take long, and once there we set up the tent and the stove, to have the camp ready.

We made some lunch, Pepper steaks, fried bell peppers and onions with rice, as usual. It really felt like fall, with the cold damp air around us. It was really nice to hang out in the warm dry tent instead.

After lunch we paddled out to do some fishing. It was a team effort, where I threw in the lure, and C reeled it back in. We did it for a while, but didn’t catch any fish. I didn’t really put much effort into it either, but it would have been nice to catch a pike.

The rest of the day we mostly hung out in the tent. With the damp cold weather outside, C preferred the inside of the tent instead of the cold outside.

When it got dark we lit the oil lamp and my new UCO candle lantern. That, and the light canvas of the tent gave us some really ambient lighting. 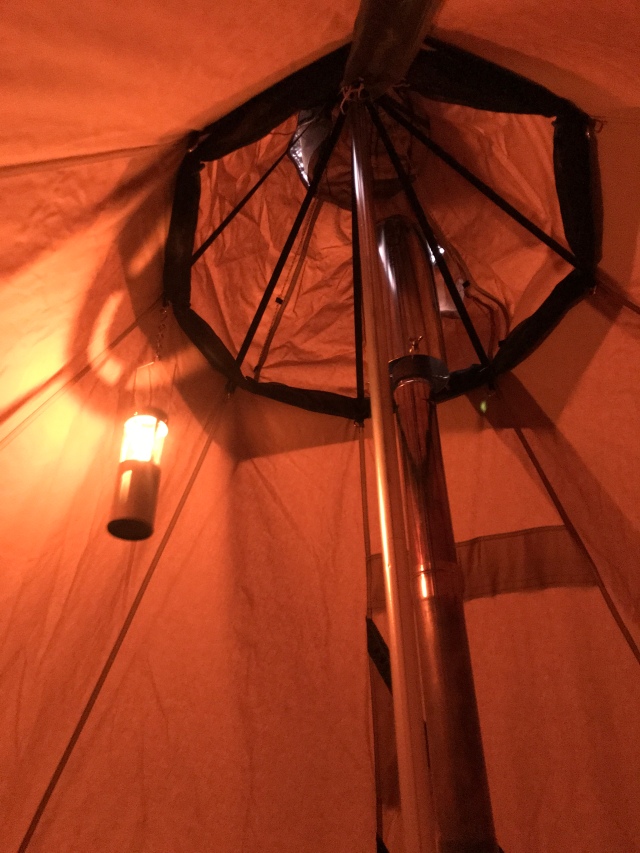 For dinner we had burgers, which was C:s choice. But I’m not complaining. 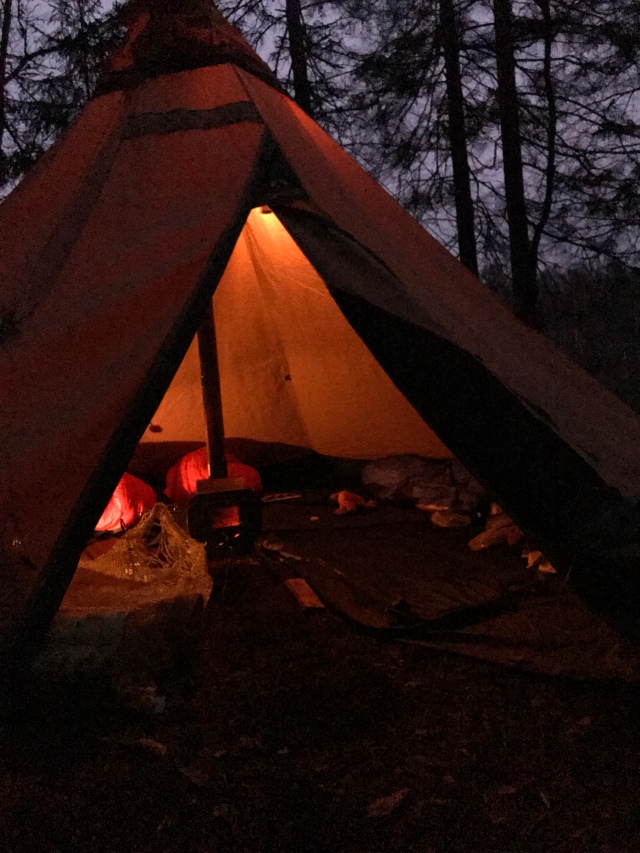 The next morning C was up and running early. Too early in my opinion. She had used my arm as a pillow, which forced me to lay on one side the entire night. I usually toss and turn a lot, so I didn’t get the best sleep this night.

We fried some pita breads for breakfast and then explored the island. It was a small island, and we had camped at the southern end of it, but there was a nice spot for a tent at the northern end too. Good to know for future trips. 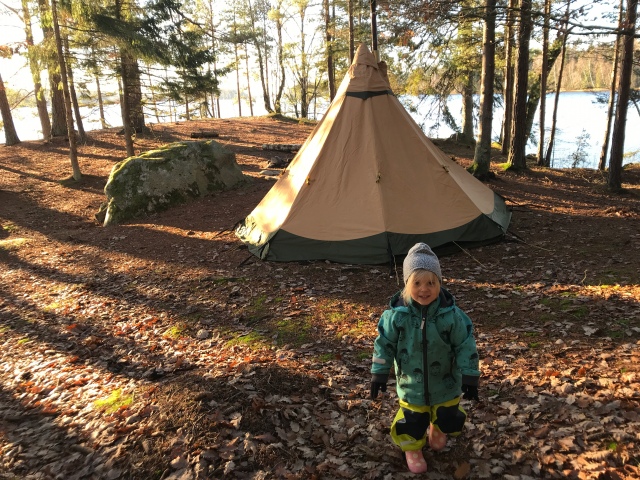 We went out with the canoe again to do some fishing. Same procedure as the day before, with me throwing it out, and her reeling it back. But we didn’t get anything this time either.

After that last attempt to catch something we paddled back to the island and took down our camp. We paddled the short stretch back to main land, packed up the car and drove home.

This had been my first night out with a canvas tent. I actually sold my Bergans Ally to fund the Tentipi Safir instead. It’s heavy and bulky, but roomy, light, comfortable and easy to set up. The quality feels impeccable, and since the fabric breathes you don’t get bothered by condensation. For these kind of trips, where comfort and good food is the main goal, a tent like this is perfect.

One thought on “Autumn canoe camping in a canvas tipi”