A few weeks ago I took C with me to Stora Mosse National Park, about an hours drive north of Växjö. I’ve been here before, and last March I camped here.

Stora Mosse is a large mire, the largest in southern Sweden, with dozens of km of footbridges across it. Spread out in the “mire-ocean” are several islands. Camping has been prohibited before, but since a couple of years back you’re able to camp on a few designated places in the park. 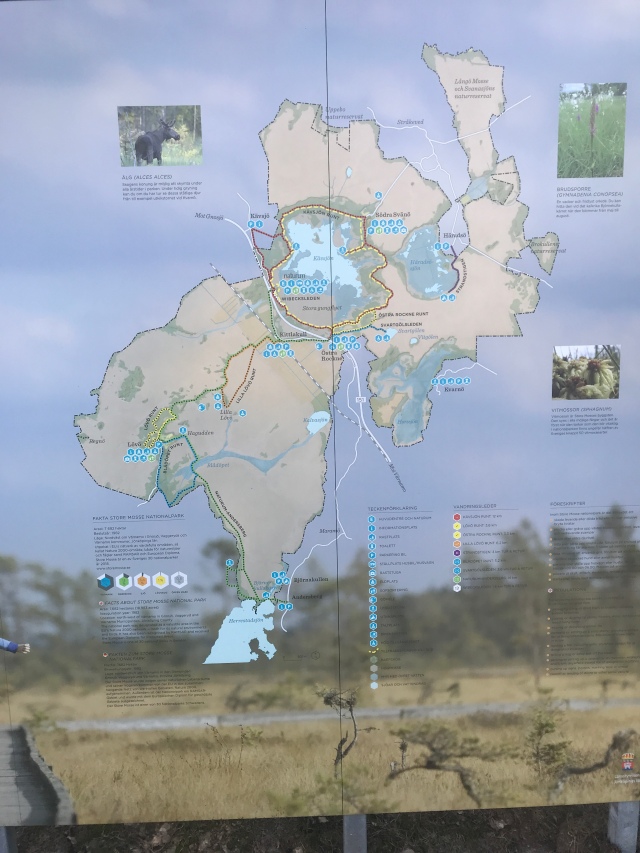 The mire consists of a southern and northern part, cut in the middle by a road and a railroad. The previous times I’ve started at the northern end of the south section. But this time I wanted to see the northern section.

I parked the car at the main entrance and we started to walk the trail around the lake there. We hiked for just a short while, until we stopped to make some coffee and hot coco.

While we stopped I changed my mind, and decided that I wanted to go to the southern parts anyways, where there are more vast views. This time though, I would start at the southern tip of the mire instead.

We drove to one of the southernmost entrances instead, and started to hike.

After only a short while, we stopped at a bridge with benches to make lunch.

The first part of the trail stretched through a pine forest, but after a while the trail turned and became footbridges that stretched some 6km north across the mire.

C hiked on in a good pace, and even though she missed a couple of steps and put her foot down in the wet mire she was in good spirits. 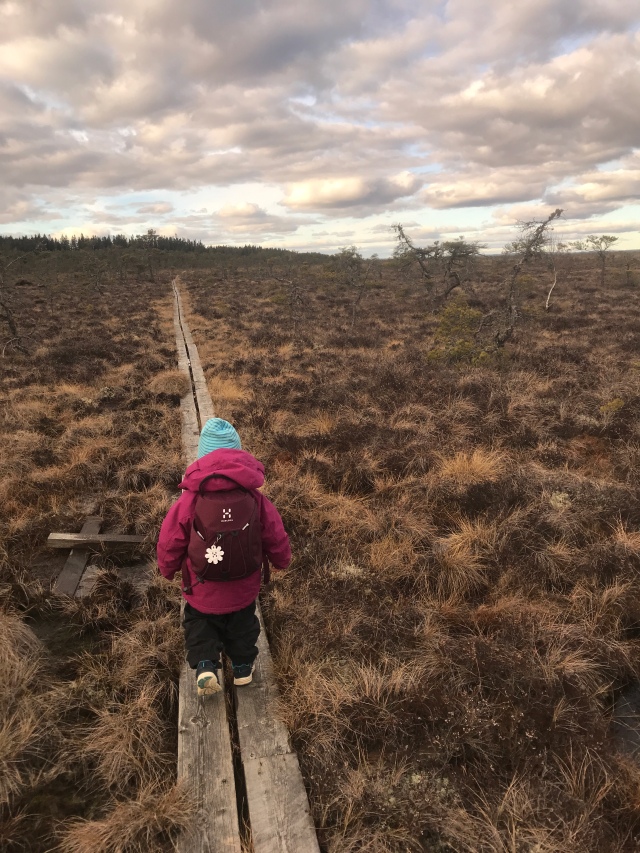 When we came to an intersection we turned west towards the “mainland”. We where going to hike a circle trail with an observation tower on a hill in the forest.

Once back in the forest the trail went uphill. C preferred to ride on my shoulders in the uphills.

On top of the hill there was a large observation tower, made for bird watching. We climbed the steep stairs to the top, and enjoyed the view. I’m a bit scared of heights. But when I told C that, and said that I wanted to go back down she replied that it was NOT scary. It was JUST exciting to be up there. So we stayed there for a while longer.

When we got back down we hiked the rest of the loop to get back to the car. We had been out the entire day, but C still didn’t want to get back home. She was disappointed that we’d only gone on a day hike, and wanted us to camp there. I promised her that we’d camp the next time we got there.