There’s a Facebook group called Outdoor Life Växjö where we share tips and tricks about gear and sweet spots nearby. The group has meetups every now and then. Since a lot of the members in the group has kids I thought it would be fun to have a meetup with the kids.

In mid September a bunch of us met up on Skälsnäs on the northern side of Helgasjön. Christoffer and E from Friluftsfrämjandet Skogsknytte also joined, and Christoffer also brought E:s little brother. A couple of the guys who came with their kids only stayed for the evening but four of us camped with our kids.

Skälsnäs is a good place for car camping trips. There’s a shelter, privys, a sandy beach, several fire pits and lots of room for tents.

I had brought the Tentipi with the HeatPal. Since it was a car camping trip I wanted as much comfort as possible. I had also brought a lot of good food, with a couple of beers and tasty cheeses and sausages. But despite having the carriying frame I wouldn’t want to carry this setup any longer distances. It really is heavy.

We had a fire next to the shelter and hung out there most of the evening. The kids where playing, but C was a bit shy until Christoffer and E came. C was very happy that E came and they played together for the rest of the evening. When it was getting darker they went inside the tent with snacks and an iPad to watch a movie. The kids had been soaked from playing near (in) the water and I hung up the clothes to dry and fired up the HeatPal.

The adult stayed by the fire, chatting and eating. It was really nice and relaxing. By midnight it was time to go to bed. Dario, who started the Facebook group, and his daughter and friend used the shelter, while the rest of us used tents.

Next morning Christoffer and I had to leave pretty early, since we where going to Skogsknytte with the kids. It was more important for Christoffer since he is one of the leaders om Skogsknytte.

It was a fun trip, and nice to be out with the kids and meet other patents. I’d love to do it again, but next time I would like to do a hiking- or paddling trip instead of a car camping trip.

New overnighter with C in September

This was my first attempt at filming a trip. It’s sort of Slow-TV, with no talking, so it might not be everyone’s cup of tea.

The trip it self was great, and I’ll post a written trip report soon.

I’m on parental leave for all of February, and I had planned to do a lot of trips with C. But it wasn’t until last weekend that I actually got out on an overnighter with her.

Since it’s still cold outside I wanted to use the stove. But with the lakes frozen over and no snow on the ground to be able to bring the heavy gear with either a canoe or a pulk, I had to choose a place that was fairly close to the car. So I got back to our new favorite spot at Tolgasjön.

The first half of February had rained away, but this day we had great weather, with the sun shining and the temperature a few degrees above freezing. It felt like spring.

As usual, C had fallen asleep in the car, and I carried the gear out to the peninsula before I woke her up. We then set up the tent and the stove, and got our sleeping gear out. 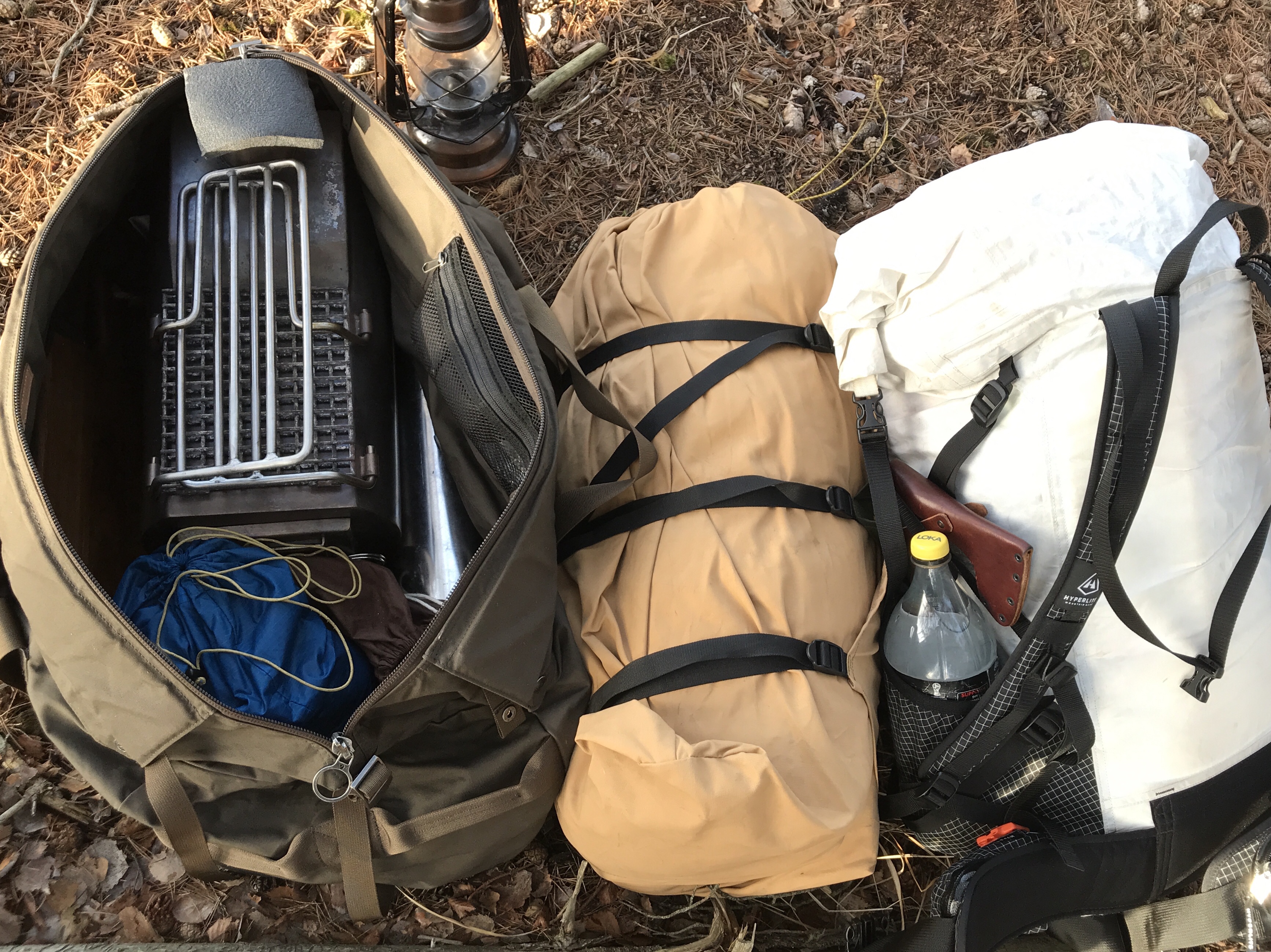 I’ve bought a Fjällräven Duffel no. 6 for the stove and the cooking gear. The reason I choose this one and not the one from GStove was the retractable shoulder-straps, that makes it possible to carry the bag as a backpack. I also like the look of it better.

I had brought some firewood, but I wanted to harvest some from all of the fallen trees around. I had recently bought an Eka Viking foldable saw for occasions like this, and wanted to try it out. It worked a lot better than my Bacho Laplander copy from Kershaw that I’ve used before. We didn’t take a lot of firewood though, but just enough to keep the fire going.

I sawed the branches in appropriate sizes and C carried them back to the tent and put them in a pile. I worked up a good sweat and had to remove a couple of layers of clothes.

Once the firewood was done we got the fire going and got a nice warm temperature in the tent. C mostly want to hang out in the tent and play, so we did that, with the door open. 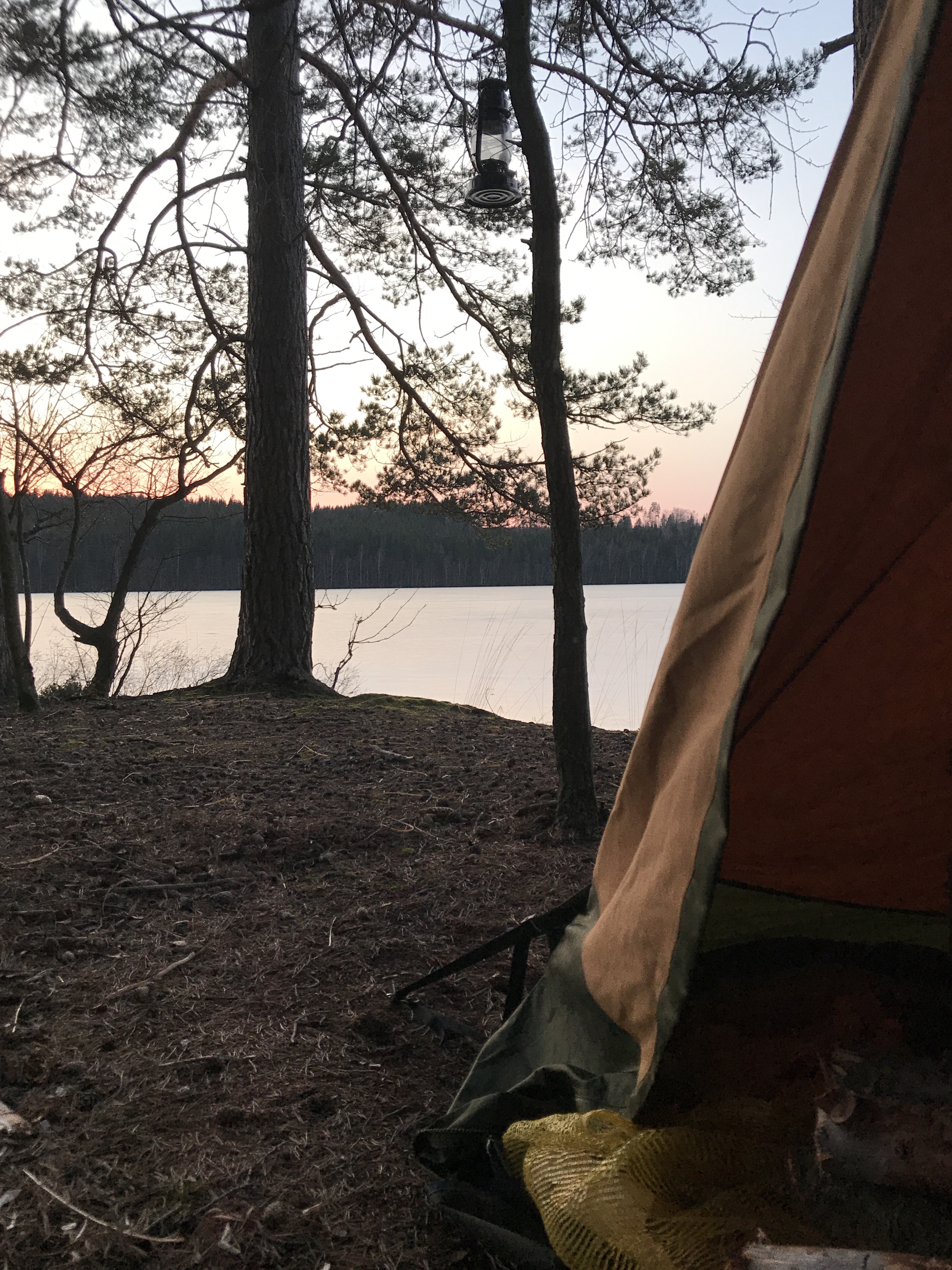 Eventually it was time for dinner. This time I had chosen to do a beef stroganoff with rice. I cooked the rice in my Toaks 750ml pot, and fried the pre-cut beef in my frying pan. I’ve bought a Ronneby Bruks UL cast iron frying pan. It’s not UL by any means, but lighter than a regular cast iron pan. When I hike I like to use Ultralight principles and I have a fairly light base weight of roughly 6kg. After a lot of trying I’ve found that this gives the perfect balance between hiking comfort and camp comfort. But when I go on trips like these, where I don’t have to carry the gear any longer distances I like to go all in on the luxury, like cooking real food on a cast iron pan, on a heavy stainless steel woodstove, in a comfortable heavy canvas Lavvu.

Once the beef was fried I added cream fraise, ketchup, tomato paste, mustard, salt and pepper and let it simmer for a while. It tasted great, even better than when I do it at home.

Outside the ice kept singing and cracking. We saw a couple ice fishing on the lake, but I have a phobia about being out on the ice, and wouldn’t dare to get out there. 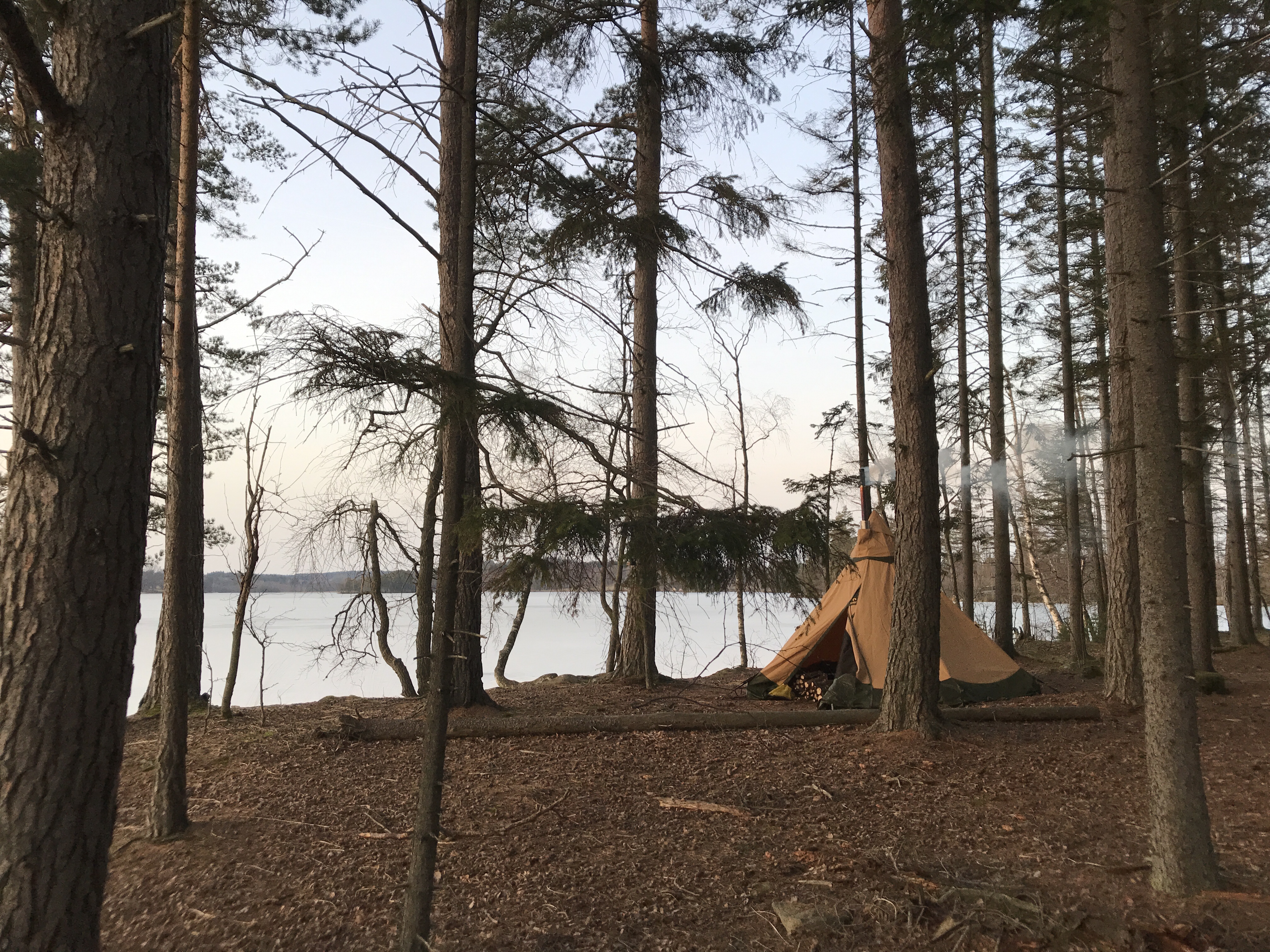 As dusk fell, the moon came up, and lit up our campsite through the trees. There wasn’t a cloud in the sky, and the stars where everywhere. We heard some screaming across the lake, and I couldn’t hear if it was human or from an animal. I screamed back a couple of times: “Is it someone who need help!” but once I’d screamed back the sound stopped. Maybe it was an animal, and the day after we found a pile of feathers from where we had heard the screaming.

We mostly stayed in the tent, since C like to play in the warm cozy tent. As usual we had a lot of snacks with us.

When it was time to sleep, C fell a sleep pretty quickly. I stayed awake for a while longer, reading and listening to the sounds of nature.

Both of us slept good through the night. I woke up a couple of times, and listened to the ice. It was making sounds almost constantly.

By morning I woke up before C for once. Most of the times she wakes me up with a: “Is it morning now?” and I just want to keep sleeping. Since she was still asleep I decided to get up and get the fire going before she woke up.

We fried some pita breads for breakfast and then put on all our clothes. It was time do do some exploring. 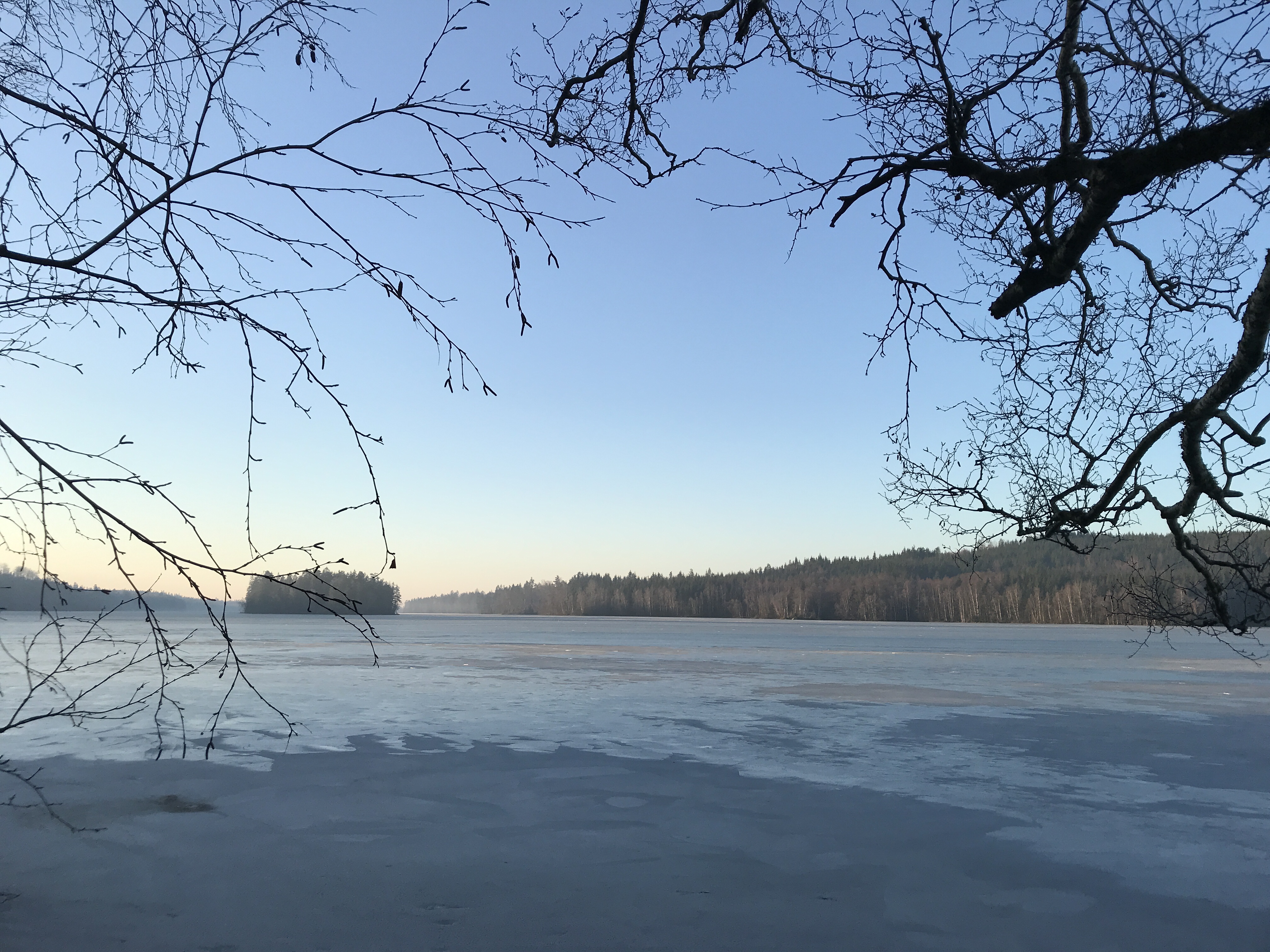 The stove was going to take a while to burn out and cool down, and I wanted to explore the area around the peninsula.

We followed a logging road to the end, and then we walked down to the lake. The small peninsula is on one end of larger cape, and we followed the shoreline to get back to our campsite. There had been a lot of logging in the area, and the surroundings consisted of different patches of clear cuts or young birch forests, but down by the shoreline the trees where left mostly untouched.

Now and then we stopped to play. A fallen tree became a bus, and a tree stump was a bus stop. The sun was shining in full force, and the shift in temperature from the freezing night made the ice sing and crack constantly. It was a fascinating sound, and I really enjoyed listening to it, while my little bus driver was going from station to station behind me.

We slowly came back to our campsite, where the stove had cooled down completely. At first, C didn’t want to get back home, but by now she was ready. I’ve gotten a good routine now, and quickly got the camp packed. We left the unused fire wood in a nice pile next to the existing fire ring and headed back to the car.

I had a great time, and it’s always fun to be out with C. I miss hiking, and I miss canoe camping, but these trips are great too.

We’ll probably get out in a two-night trip from Thursday to Saturday this week. My oldest daughter is in Athens, and my son is going to visit his grandparents, so if we’re lucky, my wife will join us too on Friday after work. She’s not that outdoorsy though, so maybe she’ll just enjoy the peace and calm of having the house to herself for once.