As I’ve wrote in previous posts, my big trips this year was planned to be the Arctic Circle Trail between Kangerlussuak and Sisimiut in Greenland. I had really been looking forward to it, and basically everything was planned, except buying the plane tickets. The thing is though that I’m also going on a week-long hike with my childhood friend Fredrik, who hiked with me in Jotunheimen last year. Three weeks away from my family this summer was to much, and I decided to postpone the trip to Greenland. It actually felt like a hard choice to make as I was dead set on getting to Greenland, and my planning had to start from the beginning again. My wife has told me though that we’ll make sure I can go to Greenland next summer instead.

I still wanted to go on a two-week hike, but Fredrik wanted to hike for a week at the most. To make this work, I had to come up with a route that would make it possible for me to start hiking a week in advance, meet up with Fredrik and then continue together. I also needed to make sure there were shortcuts to our meetup point if weather or my physique would keep me from reaching it in time.

If I could make this work, I would still get the solitude I wanted the first week, and then a second week of hiking with a good friend. I started to look at Sarek, but I’ve never been there, and from answers in Swedens largest outdoor forum I came to the conclusion that it would be hard to put together a 1+1 week trip that didn’t include Fredrik flying out with a helicopter to a meetup point. I knew before even asking him that this wouldn’t be an option. I also felt that hiking for the first time Sarek, with no marked trails, shouldn’t be done with a timeschedule like that.

Eventually I looked at Kungsleden, the Kings trail, and the possibility to meet up at Nikkaluokta and hike to Abisko together. My plan was to start south of Nikkaluokta about a week before Fredrik. The starting point had to close enough to reach Nikkaluokta in time even if the weather forced me to have a rest day or I would hike slower than I had planned. But I also wanted to be able to take a longer route if I hiked as fast, or faster than planned.

After looking at the maps and searching for places to get to by bus I planned to start at Vakkotavare, in the lower left corner of the map. I would then follow the green line to Singistugorna. Here, I could turn east and hike to Nikkaluokta (the red line). This route should take approximately 3 day. But my initial plan is to keep following the green line until 2,5-3 km before Sälkastugorna. Here I’ll turn east along Gaskkasjohka. I could turn south again and take a shortcut to Kebnekaise mountainstation and then hike to Nikkaluokta (the orange line), keep hiking to Kaskavagge and there turn south to Kebnekasie mountainstation (the yellow line). But the plan is to hike around the mountain Palkastak and then hike south along Visttasvaggi until I reach Nikkaluokta (where the red and green line meets in the right part of the map).

I have also done a few gear changes. A few very large gear changes. I did spontaneously bought the Exped Expedition 80 backpack, but I realized that I didn’t want to go the heavier route, but instead will try to fit two weeks worth of gear and food in my Exped Lightning 60 pack. If I come to the conclusion that I’ll need a bigger pack I’ll probably just go with the Hyperlite Mountain Gear 4400 Southwest instead. A sub-1kg 70l backpack.

But I’ll do my best to get the gear to fit in my 60l backpack. I thought I’d use this summers trip to test it. Otherwise it would be easier to have just one weeks worth of food in the backpack and then post a food cache to Nikkaluokta and restock for the second week. We’ll see how I’ll do it.

Anyways, I’m a bit embarrassed to write about it, but I sold the Expedition 80 pack without even using it. I don’t want do start using heavier gear again, and I think I’ll be fine using the Lightning. I also sold two old backpacks that haven’t been used for a long time, my Hilleberg Enan and my Luxe Outdoor Sil Hexpeak.

I did get quite a lot of money for the gear I sold, especially the Hilleberg and the Exped pack, and I used the money to buy new gear. I’ve ordered a Hyperlite Mountain Gear Ultamid 2, polestraps and a Gossamer Gear polycro groundsheet from Backpackinglight.dk. They have great service, and if you order for more than 5000DKK you get at 10% discount on your order. I also ordered a Borah Gear cuben bivy with a sidezipper.

With this setup my shelter, with polestraps, groundsheet, tent pegs and bivy will weigh ~900g. And it will be large enough to use with my wife or with two of my kids. Hopefully this will subdue my gear ADHD and I’ll stick with what I got. 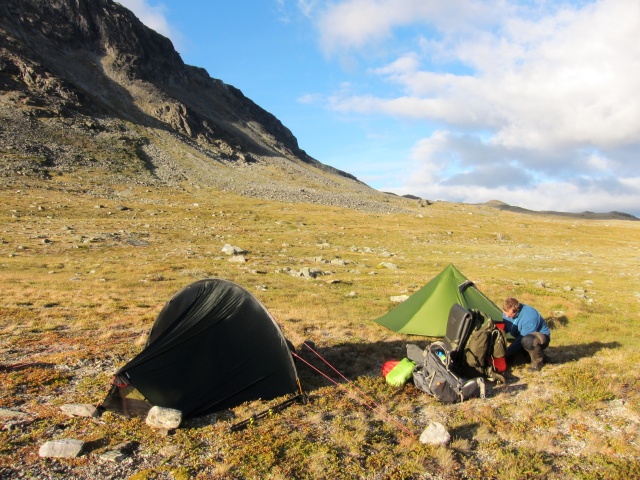 The New Years Eve is closing in, and it’s time to sum up the past year. My goal for the year was to get out on at least one overnight trip every month of the year.

I didn’t succeed with this though, but I did get out on quite a few trips.

When it comes to gear I both added and changed a few things. My biggest purchase was the Hilleberg Enan. I actually like it better than I thought I would. I was afraid I’d find it too small and cramped, but it felt a lot roomier than expected.

I also bought a down quilt from Cumulus. This was my first time using a quilt instead of a sleeping bag, and I’m still not sure if I like it. I might end up selling it, and buying a Liteline 400 instead.

I also bought an Exped Winterlite sleeping pad. I really like my Synmat 7 UL, but as soon as the temperatures drop below freezing I find it too cold. It was comfortable and warm, but the mummyshape takes some getting used to.

During the fall I started to stock up gear for my planned ACT hike. After the trip to Jotunheimen I realised that I would have a hard time fitting 12-14 days worth of food in my 60l backpack (it’s not like it can’t be done, but I’d have a hard time making it work). The hike takes somewhere between 9-11 days, but I might also start at the Ice cap, with will add 40 km to the trail. I also want to do some more advanced outdoor cooking than just eating my freezer bag meals. It also seems to be really hard to get gas canisters in Greenland and a multi fuel stove seems to be the best way to go. For this I purchased an Exped Expedition 80 backpack, a Trangia 27 ULHA and the multi fuel burner X2 to the Trangia. I did put some thought down before I bought the Trangia, considering it’s weight and volume. But in Norway, where I was constantly above timberline and with really strong winds most of the time I did miss having a sturdy stove with a better windshield. Cooking was a pain in the ass when the windshield almost blew away and much of the heat escaped because of the wind.

I’m constantly trying to improve my gear and find the perfect gear for me and for the designated trip. I try to conserve my shopping in my everyday life, but when it comes to outdoor gear, I think I have a problem. 🙂

All things considered, I had a great hiking year. I do want to get out a lot more than I do. But it is a balance between familylife, work and my need to get out on hikes.

Next year I’d really like to buy a pair of Åsnes Sondre and get out on a winter trip. I also have loosely planned to buy a canoe, and if so, it’ll most likely be an Esker Wood Ki Chi Saga. It was love at first sight, and I’ll go to their showroom next year and look at one up close. There aren’t that many good hiking trails close to Växjö (if you don’t like dark spruce forests), but Småland is littered with lakes, and with a canoe I can do a lot of trips in beautiful scenery close to home. It’s a really big investment though and I don’t know if I can prioritize the cost.

I wish you all a happy new year, and I hope that you have a lot of great trips in 2017!

In the last few week I’ve been slowly starting to prepare for next years trip to Greenland. As I’ve wrote before I plan to hike the Arctic Circle Trail in late August – early September next year. I’ve started to make a packlist, e-mailed questions to the Greenland Tourist bureau and the Arctic Circle business, and started to make a list of the food I plan to bring, and what ingredients I need to dry.

I will bring food for 12 days, and I actually plan to do some more cooking then usual, as I’m starting to grow tired of my freezerbag-meals. For this I’ll bring a Trangia 27-1 ULHA. It’s not UL at all with a weight of 760g with the gasburner. But it’s a real stabile stoveset suitable for more cooking.

Bringing that much food calls for a bigger backpack. My 60l Exped Lightning is a great pack. But I filled it up with only one weeks worth of food. And I also want to be able to take food that takes more volume to and not feel restricted by the volume of the pack.

That’s why I ordered an Exped Expedition 80 from komplettfritid.no. It normally cost around 4500SEK on most places i looked, but komplettfritid had a discount and sold them for less 3200SEK. I was too slow to order though, and when I finally decided to buy one the discount was gone. I e-mailed komplettfritid and told them that I had planned to buy the pack but was to slow to order. Today I got a reply, with a link to the backpack, and saw that they had lowered the price again. Now that’s costumer service.

If you’ve seen my packlists and read my trip reports you can see that I have a thing for Exped. I have an Exped Synmat 7 UL, a Synmat Winterlite, the UL Pillow, the Schnozzle pumpbag and the Lightning 60 backpack. I really like their lightweight products and their great quality.

The Expedition 80 isn’t really lightweight, at 2450g. But it’s somewhat light with the volume it offers. It’s also waterproof with a PU coated fabric and taped seams. I think it will be a great pack for longer trips and for wintertrips. I love my Lightning pack, but for extended trips I think this will be great.

On another notion, I have applied for Fjällräven Polar 2017. I was late to complete the application, and I’m really far behind the leader. But as a wise person said, “it ain’t over ’til it’s over” 🙂

Please vote for me, and spread the word, and I’ll be ever grateful. Every vote counts.