Last weekend I drove to Stora Mosse National Park for an overnight trip. I hadn’t planned to be out this weekend, but my wife had seen how stressed out I was from work lately (lots of co-workers have quit or gotten burn outs which leaves an ever increasing work load for us that are still there), and thought that I might need some hiking time to wind down. She knows the outdoors is the best way for me to reduce stress and recharge.

Right up until the point where I sat down in the car it was still undecided where I should go. Stora Mosse National Park, Norra Kvill National Park or Raslången Eko Park was the places I had in mind. Eventually I decided to go to Stora Mosse, as I had only been there on a day hike before, and wanted to do an overnighter there.

Stora Mosse National park is located just north west of Värnamo, about an hours drive from Växjö, and was formed in 1982. Almost the entire park consists of mire, and it’s the largest untouched mire in Sweden, south of Lappland. Together with Brokullen och Långö Mosse it’s almost 8000ha of protected land. There is a system of pine forest “islands” within the mire, and there are 40 km of hiking trails in the park. Some of them are possible to use with wheelchairs or a baby stroller, while other trails cross the mire on 30cm wide foot-bridges. If you want to leave the foot-bridges it’s possible to use snow-shoes to hike in the mire. From 2013 it’s also allowed to camp in certain areas in the park. Detailed maps can be found here. If you’re lucky you might spot one of the White-tailed eagles or Golden eagles living in the area. You get here by road 151 between Värnamo and Gnosjö, and the road cuts right through the park. In the middle of the park there is a visitors center, but be sure to check the opening hours before you get there.

I drove up pretty early and arrived there a little before 11am. It was roughly a 1 hour drive from home. I decided to hike in the southern parts of the park, and had planned to camp near Lövö.

The temps where slightly below freezing, and it had been cold and snowy for a few weeks. This meant that the mire was frozen over and I didn’t have to walk on the foot bridges. I did however follow the trail. There where ski tracks on the foot bridges and I walked beside them to not ruin the tracks.

I hiked for about 1,5 hour before I stopped for lunch. It felt good to be out in the forest again, and I was really enjoying myself.

After lunch I kept hiking south, but stopped once in a while, rolled out my cell foam sleeping mat and just laid down, watched the trees and enjoyed the silence. 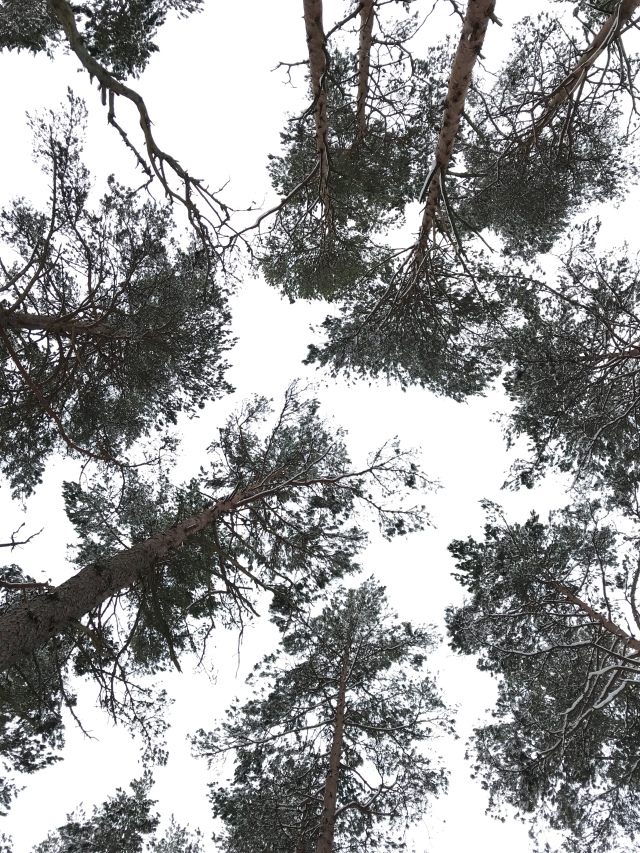 The forests here reminds me a bit of Tresticklan national park, with the old scattered pine trees. After a while the ski tracks stopped, and I kept hiking on the trail. There where no other foot prints, so I was alone in these parts of the park.

After a while I passed the campground near Lövö on my left, but continued south to hike in a circle. I hiked the circle trail, past the hut at Lövö and then came back to the camp site from the other direction. It was only around 14.00 but I set up my camp anyways. 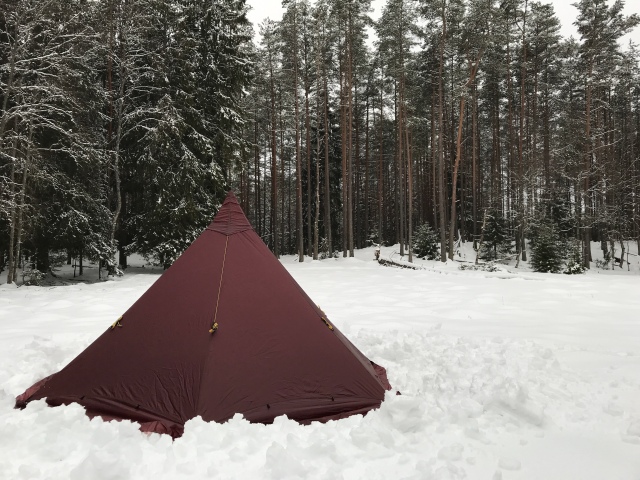 It took a bit of effort to flatten out the deep snow, but eventually I got it flat enough to set up my tent. I inflated my sleeping mat, rolled out the sleeping bag and made cup of coffee.

After that I decided to keep exploring the park. I went back to Lövö and hiked the trail towards Anderstorp.

I came to an observation tower at the edge of a forest, and climbed up. For being in the middle of Småland, the views where amazing, and you could see for several km.

I kept hiking south for a short while, but quickly lost track of the foot bridges.

I turned back to my campsite and made dinner once I got back. 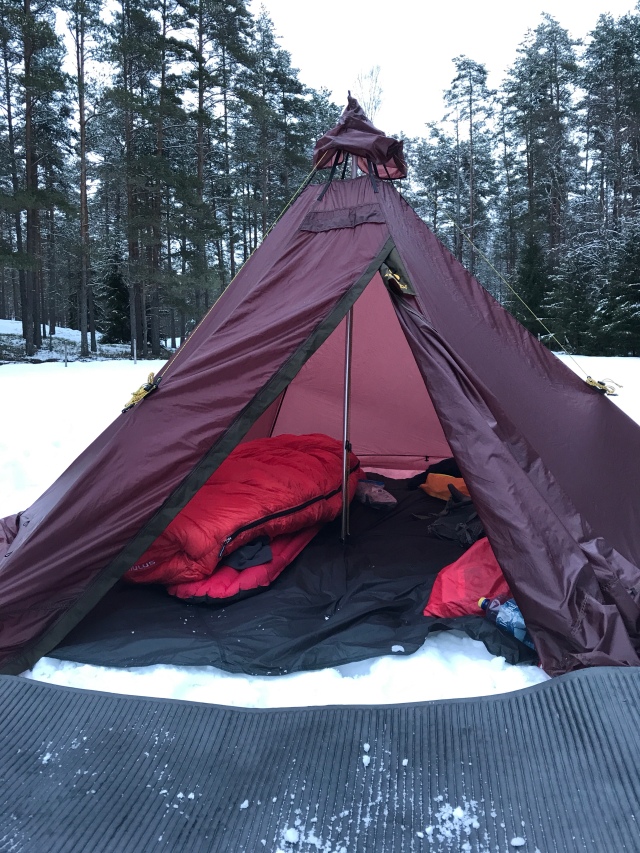 I slept with the top vent and the door fully open, and had no condensation at all. I had a pretty good nights sleep, even though I toss and turn a lot.

As usual, it took some mental effort to get out of the sleeping bag. I like winter, but now I’m really looking forward to the warmer seasons.

I made a nice breakfast of chili Brie and salami in tortillas. It was delicious.

After breakfast I packed up and left my camp site.

I hiked back towards the car, but stopped once in a while to lay down on the sleeping mat, look at the tree tops waving in the wind and enjoy the last silence before I got back to the city.

On the parking lot I met the first people since I left home on Saturday morning. A group of maybe 10 Danes where preparing for a day hike.

As usual, I had a great time in the outdoors. I really like the simplicity of hiking life, the serenity of the silent empty forest and the monotony of hiking. My mind wanders as I move silently through the trees. It was a great trip, and I can’t wait to get back out on another trip soon.