“Didn’t your parents ever told you not to go see strange men you’ve met on the internet” my 13-year old daughter said jokingly with a smile when I told her about my plans.

I’ve been reading Brians blog for a long time, we’ve commented on each others blogs and on Instagram, and we’d talked over the internet about joining up for a trip together. Last weekend we finally met up, to go on a hike together, on a ~33km circle route that Brian had made at Raslången area on the border between Skåne and Blekinge. I’ve done a hiking trip and a canoe trip here with C earlier this year, and I really like the area..

I had taken Friday off from work, and left home at around noon. A little before 14.00 I rolled up to the parking lot, and met up with Brian.

It was nice to finally meet in person, and we chatted for a while before we decided to get going. But it didn’t take long for us to miss a turn and loose the route. It’s easy to just follow the blazes, but Brians route was a mix of Skåneleden, unmarked trails and logging roads.

Our first objective was a campsite about 5-6km from the parking lot. Brian has hiked here several times before, and was shown this campsite on a previous group hike. 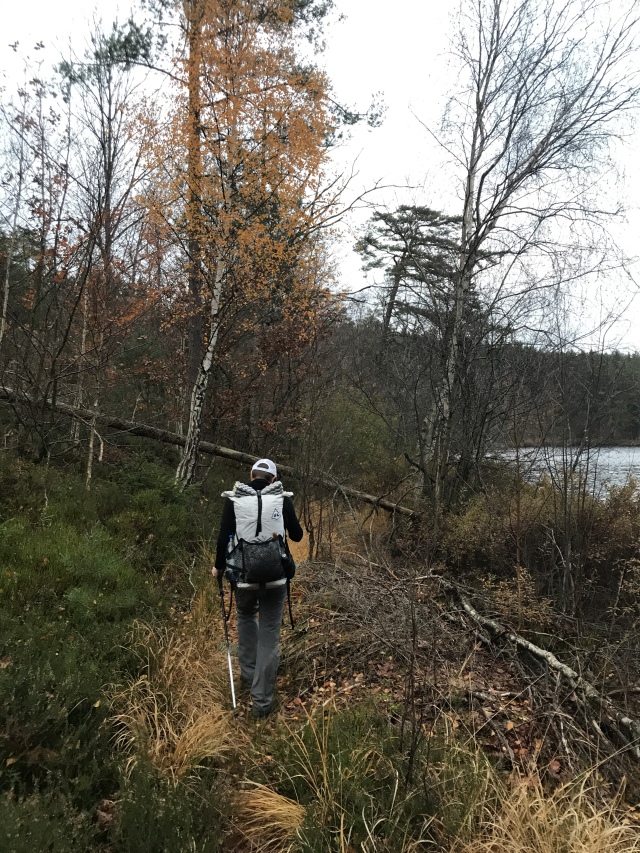 It was nice to be out on a regular hiking trip again. This last year most of my trips have been with a canoe or with Corinne, which means not a lot of hiking.

We arrived at the planned campsite before sundown. The campsite was next to a lake, hidden away, and hard to find if you didn’t know it was there to begin with. We set up our tents, and I liked seeing the Zpacks Duplex in real life, since it’s one of the shelters I have been interested in getting.

After that we made dinner and chatted for a while. The forest was pretty damp, and none of us bothered to make a fire. Both of us where pretty tired, and we went to bed early. I laid in the tent for a while, watching a documentary on Netflix, before I fell asleep.

I woke up the next morning when I heard Brian roaming around camp. I usually wake up early, but go back to sleep again. But today I was going to get up early. Brian told me that my snoring had forced him to use his earplugs during the night. Well, sometimes I wake my self up with my snoring, so I can imagine how it sounds to people nearby. 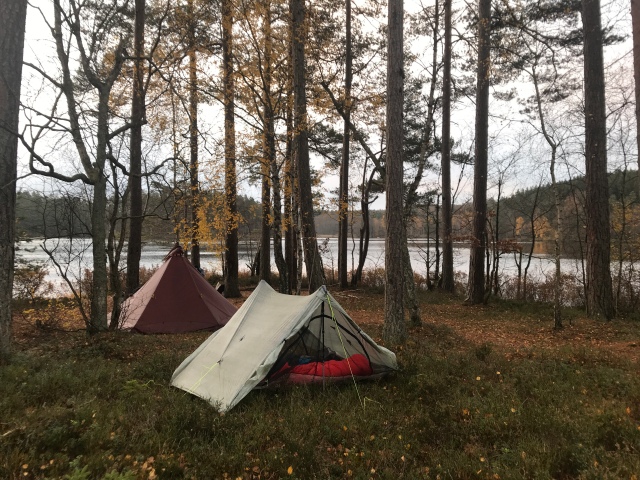 We made breakfast, but didn’t have that beautiful sunrise we had planned for. Weather reports had shown clear skies, but in the morning it was still partially cloudy.

After breakfast we packed down camp and started hiking. This days route was 18km. We followed a nice trail along the shore of the lake. It was nice to start early in the morning, even for someone like me, who likes to sleep in. 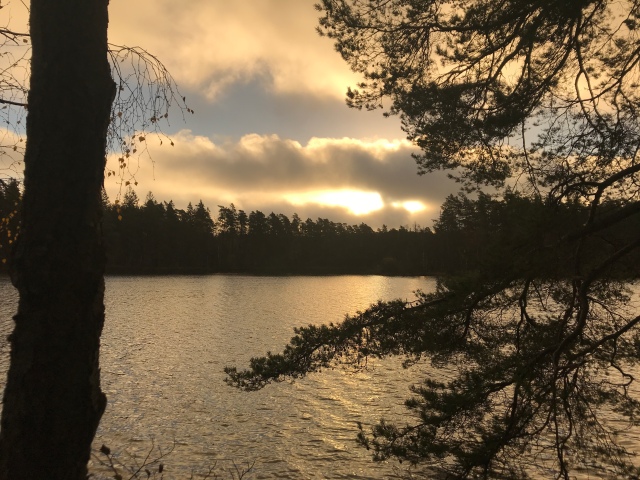 We hiked in a fairly good pace, and chatted about hiking and gear. We made it to a designated campsite, meant for both hikers of Skåneleden and canoeists. We had an early lunch. Brian has a light lunch of crackers and nuts and some nasty looking black goo that apparently only Australians eat, while I made a hot lunch from one of my home dried meals. We had a nice discussion about some of the nasty stuff that’s only eatable for certain nationalities.

We where basically alone there, and was only passed by a couple with a dog. It was a nice break, but the winds where icy cold, so we didn’t stay long after the food was eaten.

After the campsite we passed a beautiful area filled with deciduous trees. I complimented Brian for choosing such a scenic route. 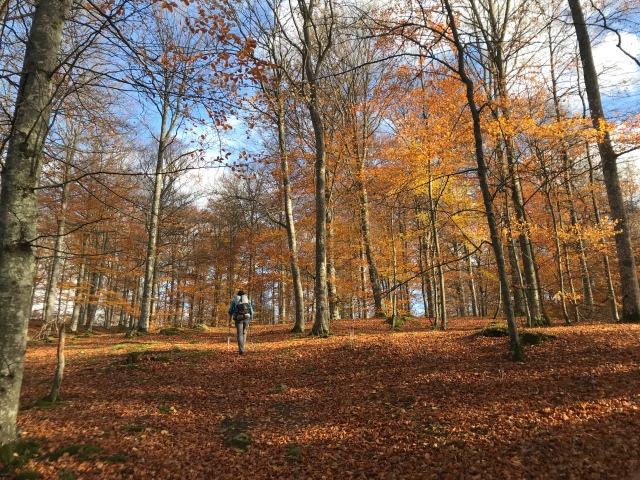 We hiked on in a good pace with basically no breaks, snacking on bars while we where walking. I like camping style trips, canoe camping trips and just taking it slow from time to time, but I also like to just push on with more emphasis on the hiking part. Since most trips this year had been with the canoe and/or with C (which means less hiking) my body wasn’t used to the pace, and I had to push myself a bit in the end.

By 13.30, we left the logging road we where hiking on and set of into the woods for campsite no. 2. We followed the remnants of a trail before it ended, and started to bushwhack.

On the way there I jokingly said to Brian that once we got there we would find a bunch of other people there already, about to have a party. Moments after I said it we heard voices in the woods, and saw a couple with large backpacks between the trees. Not what I expected far from the trail in November. We continued towards the campsite though. Brian told me that he had heard that they where Danes, and asked each other where we had gone. They didn’t follow us though.

When we came to campsite there was a lot of noise from across the water. A bunch of young guys in three or four canoes was having a break on a cape across the cove. If they’re going to camp there we won’t have a still silent evening at all, I thought. Sound travels far across water, and a narrow distance and a group of guys in their early 20th means a lot of noise. Fortunate they had only had a break there, and after a while they packed up and left. Both me and Brian where happy about that. Nature is for everyone, but both of us prefer to find seclude private campsites, far from other people. 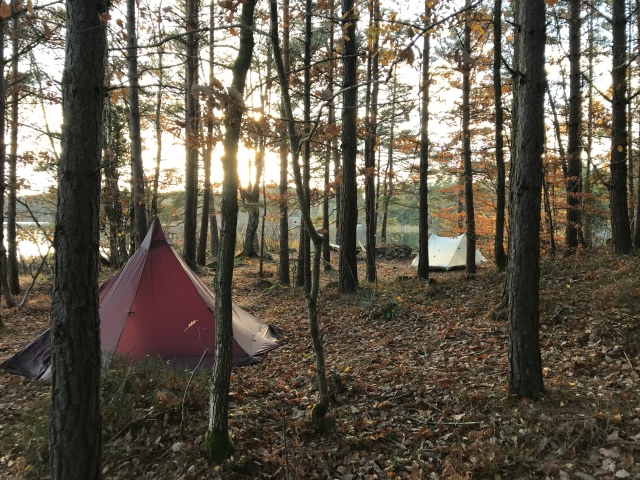 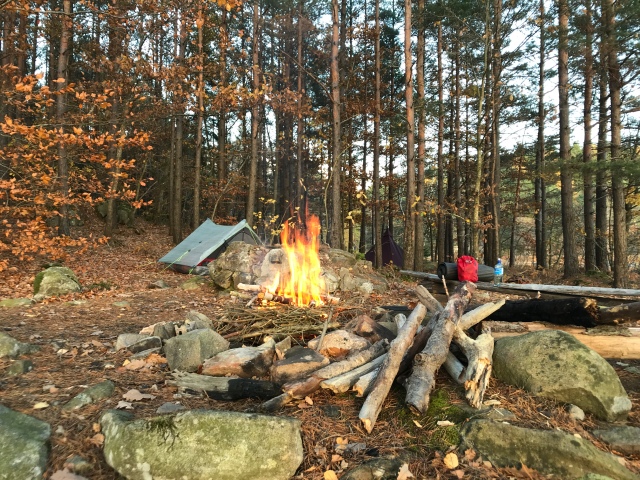 We explored the campsite and set up our tents. This night we had planned to have a fire, and Brian had to make sure that his tent was far enough away from the fire ring, not to get any sparks on it. DCF is a great shelter material, but it has a very low melting temperature.

We gathered firewood from the surrounding forest, but we where fortunate enough to have a few fairly large logs next to the fire place. I thought this was a good place to try to make a star fire for the first time. I’ve never tried it before, but it would save us from having to pile up a lot of extra firewood to keep it going throughout the evening. 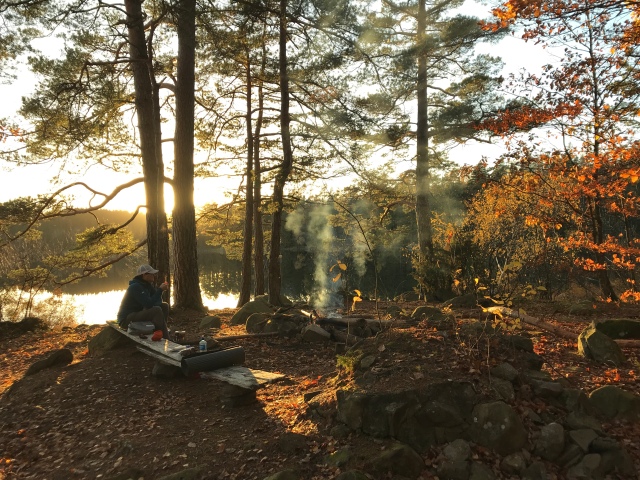 We made dinner by the fire and watched the sun set across the lake. And the sunset was truly beautiful. The lake was pitch black, with the surface still as a mirror. Sounds faded away, and there was a silence so complete that I’ve only experienced it once before. You could almost hear your own heartbeats. 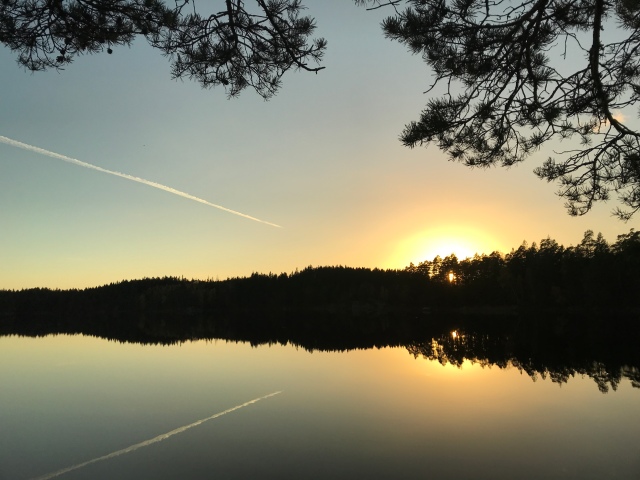 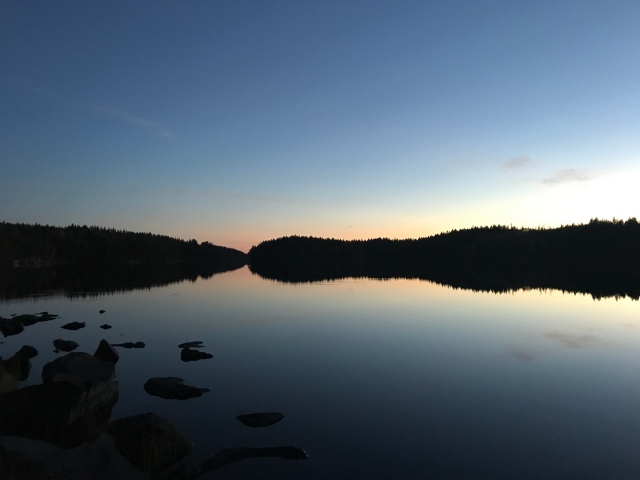 We stayed by the fire for a few hours, sharing the Whiskey Brian had brought, and talked about everything and nothing. The skies where clear, and stars where everywhere.

Eventually we got too tired to stay up, and went to bed. I watched Netflix for a while and then went to sleep.

As usual I tossed and turned quite a bit, and didn’t sleep too good. I woke up when I heard Brian roaming around camp, and got up too.

The weather was worse than the evening before, and the mist was thick enough to cover the other side of the lake. We had breakfast, packed up and left camp and around 08.00. We had ~11km to go.

My body was sore from the previous days of hiking, but soon warmed up. The mist also cleared up a bit eventually.

When we came back to the road we had left yesterday we passed a campsite with two lean-to shelters. Both of them where occupied. I was a bit surprised, since I’ve rarely met people when hiking off-season. 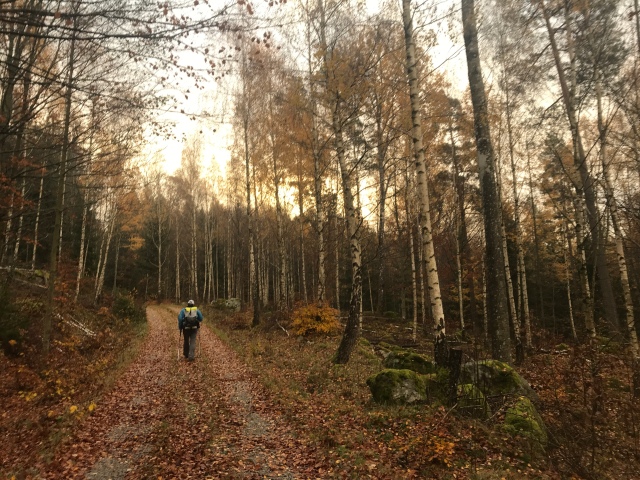 We hiked on, and Brian filmed occasionally. Eventually we reached the parking lot, and packed up the cars.

It had been a nice trip, and it was nice to finally meet Brian face to face. We had a lot to talk about, and I think it’s interesting to see and talk about the gear other people use. We decided to meet up again for more trips. Next time though I’ll plan a canoe trip instead. 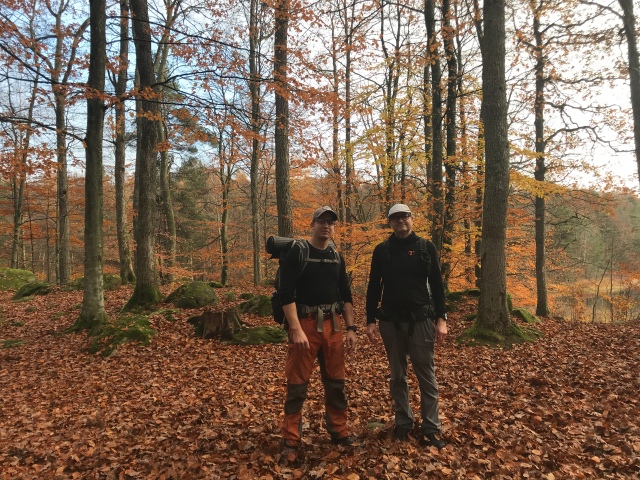 Thank you Brian for a nice weekend and a really nice route. Get really for some canoeing next time 😁!